On relinquishing control and having faith.... 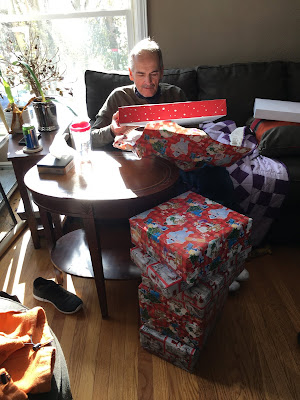 I used to have a little plastic rock with the word "Faith" on it.  I'm not sure where I picked up this little piece of plastic, likely it was an impulse buy in the gift shop where I work, and it really was a stupid purchase especially in the eyes of my family.

Who buys a plastic rock?!

I never denied the stupidity of the purchase as it randomly pupped up around the house: pulled out of the dryer, randomly stuffed in a junk drawer, or occasionally being found under the couch if the cats found it before I did.  The little purple rock took on a life of it's own around our house as it became a household joke and familial eye roll.  When I found it, I would scream for all the rest of the household to hear:  "I found my faith!"

If I sit back and reflect on life though, "faith" is like that.  For me it comes and goes, and sometimes it's hard to believe in and even easier to loose.

I admit I'm the queen of trying to manipulate the Universe into getting what I want or think I need.  Pairing this with the fact I'm a self proclaimed "fixer", sometimes I push against the Universe so hard that the Universe has no option but to push back.

However, if I look back I am constantly amazed how situations work themselves out.
How the end results are often better than I could have ever imagined if I just surrender control, stop trying to move a mountain and just have faith.

My dad and I had a relationship in that we both lived our lives, and would come together for dinner, or visit when time allowed or when one of us needed something from the other.  We would talk on the phone every week or so, and I always knew he loved me, but we were both just content living our different lives.  My sister and my father were much closer.  She saw him much more than I did, went places with him, took him to his doctor appointments, and selfishly I was okay with that.  I didn't want to stop living my life to deal with his life and his life choices.

Faced with my dad's illness, the fact my sister was moving out of state, and the realization I was going to be taking care of him pretty much alone, I was pissed.  But, as usual, God knew what he was doing.....

You see, my sister moved out of state because she got married, and it forced my dad and I to have to be together.  Without my sister to provide for him (And she always did a fabulous job!), he had to depend on me, and knowing I was his only option, I had to step up my game.  In the beginning, I was really inconvenienced with the fact  I had to use 144 hours of vacation time to drive him to doctor appointments at the Cleveland Clinic, or all the hours I had to sit while he was sick in the hospital with bouts of pneumonia. meningitis, and other ailments....  (The man was like a cat with 9 lives!)  Or the fact that due to his dementia, he insisted on eating out every night at his favorite restaurants, and I had to foot the bill for this plus keep him out of the nursing home until after 9 pm.

Many times, I would call my mom and cry/scream that this was not fair.  My mom's words of wisdom were always:  " Emmy, this isn't forever.  One day you will be happy you did all this.  And in the end you will know you did everything you had to do to make his life better.  You will see this benefited you just as much as it did him.  Just have faith...."

In the end that is exactly what happened.

If my sister hadn't moved, if I hadn't had to step up my game, I would have missed hundreds of hours of being with my dad, of talking to my dad about everything from his childhood ponies, life with his siblings, his funny antics and the mischief he had gotten into along the way.  He told me secrets I will forever keep, we scouted out the best place to eat chicken wings and completely dominated some rouge trucker at the claw machine game in a Denny's on I-71.  We went to a Christmas Eve church service together, and he spent the night with us, so I got to wake up on Christmas morning with him just like I did when I was a kid.  We binged watched Hallmark movies together and curled up with heavy quilts by the fireplace.  He went the horse barn with us, we made a lot of new friends together, and most importantly we laughed.  We loved.

On grief and bravery.... 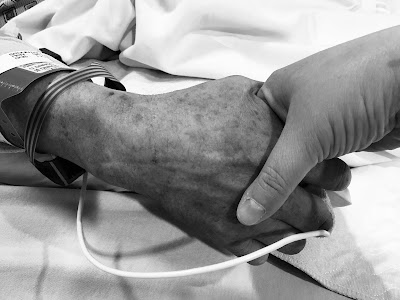 I miss my father so much, that sometimes the depth of my sadness makes it hard for me to breathe.
And pick up a pen to write?
Forget it.
It's as if my creativity died with my dad.
I have things that want to come out.
I have thoughts that I want to write about, but the words are stuck in some weird grief purgatory.
It's as if there is a disconnect between my mind and the outside world.

The loss I have experienced is in every corner of my life.  It's in the corner of the living room where we would sit on the couch and watch Hallmark movies.  Or where he excitedly opened his Christmas presents on Christmas day.

It's in every phone call I still make, forgetting he will never answer my calls again.

It's in my car where he and I logged a millenary of hours driving to and from our nightly dinners and The Cleveland Clinic.  Confession time:  His pajamas are still folded on the backseat and his half eaten package of Hall's cough drops are still in the dash compartment.  At this point I'm fairly sure I will eventually sell the car with his pajamas right where he left them, because I can't wrap my head around removing them from the backseat...

The loss is in my wife's eyes as she says to me:  "I don't know what it's like to be married to you.  We have yet to have a normal life."

The truth is death is painful and walking through the grief requires a colossal amount of bravery.  A bravery I'm not always sure I possess.  As the waves of life throw me about, from side to side, I know the only way through this grief is to allow myself to feel it.  I can't ward it off.  I can't rid myself of it.  I can only turn inward to reflect, honor my heart's request for quietness, and remember the only way to emerge into the light of a new day is to experience the previously dark night.

Posted by Emily Cromer at 8:03 PM No comments: