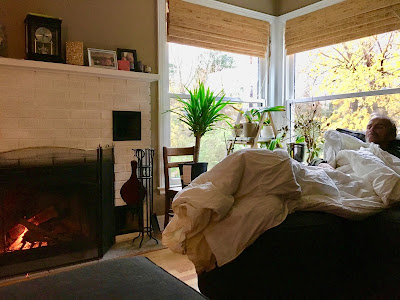 This morning I woke up sad and missing you.

Last year on this day, you were on HIV medications for a total of 5 days, you were so weak you could hardly walk, and you had lost 60 lbs.

You had just gotten out of the hospital but staying in a nursing home, and you were adamant you did not want to spend the holidays in a nursing home, so I thought:  "No big deal.  I will take you with me to Thanksgiving at mom's house."  Only, this time, for the first time, you weren't welcome there.  (That would later be a blessing...)

Determined to honor your request and not have you be in a nursing home, I decided I would skip Thanksgiving with the other side of the family, and we would just celebrate at our house this year.

I was determined to cook a Thanksgiving meal, even though we all know I am the least qualified to cook a meal for anyone....  Surprisingly, it turned out delicious!

We sat around all day watching Hallmark Christmas movies.  Those were your favorite and would sustain us through the entire season...  (PS: There are still several on my DVR just waiting for us to watch them.  I don't have the heart to delete them....)

We had a fire going in the fire place, because that was your favorite spot, in front of the fire place wrapped in a down comforter.

Abby, Ethan and the boys would come by that afternoon to spread Thanksgiving chaos and crazy.  Nothing says holiday like our kind if crazy, and I was so happy they came by to visit.  My heart needed the laughter of Isaac and Cooper.....

All day you drifted in and out of sleep while your new anti-viral medication wreaked havoc on your body, making you vomit what would end up being your last Thanksgiving meal.  We substituted Zofran, Sprite and chicken needle soup in for dinner later that night, and you were able to hold down pumpkin pie finally.

I didn't take you back to the nursing home until I was satisfied that you had been out of there for the "whole holiday".
If I had only known this would be our last Thanksgiving together.
If only I had known I would not have forever with you.
I would have lived my life a lot differently......
Posted by Emily Cromer at 8:39 AM No comments: 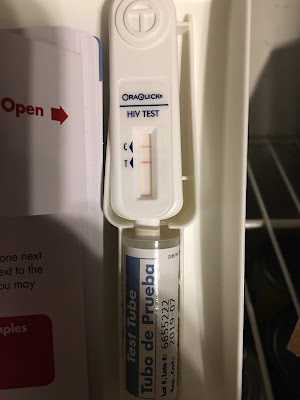 Yesterday was a particularly hard day for me, I tried to stay busy.  We went to visit my family, we worked in the yard, went to dinner with friends, but I really struggled with the date of November 10th.  A year ago yesterday I still had a father.  He was a very sick father, because no one could quite put their finger on what was wrong with him, but there was still hope.

Yet, I hit up "Dr. Goggle," and there in front of me was every symptom my father had....  The sores in his mouth, the "wasting" of weight, the diarrhea. the dementia, the lines on his finger nails, the frequent pneumonia.  The list went on, and my dad had every symptom.....  Suddenly, all I could hear in my head was my wife saying for the past several months: "Emily, if no one can find leukemia, has he been tested for HIV?  I remember in nursing school, they mirrored each other."  Only this time, instead of ignoring her and telling her she was crazy, I realized there was a possibility she was right.

Being hugely impatient, and just wanting everyone to be wrong, I stopped by the drugstore on my way home that night, and picked up an "at-home" HIV test.  (Yes, they do make those....)  I went to my sister's house, we swabbed my dad's cheek, and then huddled around an HIV test ready to wait 23 minutes for the test to be done.  Although, we didn't need 23 minutes.  The test came back positive in 3 minutes.  I literally felt the bottom drop out of my world on November 10th, 2017.

I was absolutely numb when I drove home from my sister's house that night.

I immediately went home, joined an AIDS/HIV group on Facebook, and tried to go to bed, but sleep never came that night.

I was up at 2 am, bawling, screaming and pleading with God and anyone else who would listen, for a different diagnosis.  Instead I found a 24-hour support line for people newly diagnosed with AIDS/HIV.  I called them in complete hysterics, ugly crying, and unable to catch my breath,

I poured my heart out to a woman on the other end of the phone line saying things like:  "My dad isn't gay!  My dad's white!  My dad doesn't do drugs!  He hasn't even dated in 10 years!  How does this happen?!"

The woman on the other end of the phone was some sort of saint.  She let me cry, swear, and come completely un-hinged.  She answered every one of my questions, explaining HIV doesn't know race, sexuality, gender, or an age group.  She educated me, explaining what blood levels I needed to ask his doctors about. Talked me off a ledge when I was too afraid to test myself.  (Negative!)  She explained HIV could lay dormant in the body, not showing signs for decades, until the immune system was compromised and that's when it would rear it's ugly, opportunistic head.  She armed me for the days to come with knowledge, and courage, explaining she had been where I was sitting and reassured me I would become an HIV/AIDS expert by the time the weekend was over.  She was right and she became my constant 2 am voice of reason as we navigated forward.

If you are ever in a crisis, you will hear people say: "God doesn't give you more than you can handle."  I called bullshit on that statement November 10th, 2017.  God WILL in fact give you more than you can handle so you remember to look to Him when you're walking through a storm.  And it's through Him you will find no one truly walks alone.  The people who were placed in our path, were absolute gifts from above.  They were exactly where we needed them, when we needed them.  From the woman on the HIV hotline, to a friend who had a friend who worked at Equitas and helped him obtain discounted medication, to the Ryan White Foundation, and all the nursing home people who loved my dad and worked tirelessly to help us find our new normal, never once making him feel like he was "less than or different". These folks became our tribe, and even when there was no hope, it was the kindness of these people who helped us through  the hard times and allowed me to recognize the positives.

I've never written about my dad's diagnosis and illness, because I was embarrassed and didn't want the stigma of HIV to affect our family, but I think part of healing is to grieve and remember, so I've decided to write in an attempt to help heal my broken heart and bring awareness.  Possibly, just possibly, someone out there will read this, get tested, and live a long life due to a diagnosis and medication intervention.  My dad would have loved that.....
Posted by Emily Cromer at 9:15 AM 1 comment: