This morning I am eagerly awaiting the arrival of a foster dog, whom is coming to me from several states away.  While she is here she will be having her leg amputated due to an old injury that was not repaired, and by the look in her eyes, she will be learning to trust, love and just be a dog again.
As I was on the phone this morning scurrying to find a crate for this girl, one of my kind and well-meaning friends said:  “Oh, that poor dog!  I am glad she has been rescued, and now she will be loved as a rescued dog!”  I know that my friend means well, seriously, she is one of the kindest people I know, but can I just say I hate the term “rescued”?
The term “rescued” in my mind deems a dog “less than”.  Do adoptive parents walk around introducing their children as:  “This is my biological son, Michael, and my adopted son, Joseph.”?  No!

To think of a dog as a “rescue” dog automatically labels it and puts you in the frame of mind to feel sorrow, or excuse it’s behaviour, and that label holds the dog back from moving forward in life.  I wish I had a dollar for every time I heard an owner say:  "Oh, he bites because he was a rescue dog."  or "We don't make her do that because she was abused in her last home."  I have some advise for you:  Get over it!  The dog has!  And if the dog hasn't it's because of the emotional baggage you have now placed on the dog by trying to "save" it from it's past life.
When this girl gets here, she will be greeted by a group of semi-well behaved (Chihuahuas are never well behaved…) dogs who will lay a lot of my ground work.  These dogs make it easy for me to rehabilitate dog after dog because they were once her and I “chose” to invest in them.  She will be treated like every other dog that has ever come through this house.  She will be expected to not fight or bite, to potty outside, and as soon as she is well enough, she will be given a job.  (Nosework, obedience, etc…)

To a dog that has never been given a chance, or had someone to love it, the best gift you can give it, is to be allowed to move forward with life.  Dogs live in the moment, and don’t dwell on the past, so why would we hold them back? 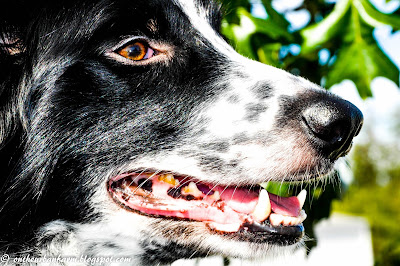 This has been a particularly rough week in terms of training Lilly.  For whatever reason, she has been crazily wound up all week anytime we work, to the point that she is missing hides on the first/second pass because she is in a constant state of tail tucked, ears back, smile on her face euphoria anytime we work.  Why?  Only Lilly knows....

In order to harness some of her happiness and restore order to our life, I decided to take her to the dog park tonight with the hope we would find some dopey, adolescent male Labrador, that might not mind an intense border collie bossing him around.  Sadly, though no one was at the dog park.

Well, until this man showed up at the fence and started watching us.

After this guy stood quietly at the fence watching us for 15 minutes, my mind went to the darkest place imaginable.  And I was just getting ready to go into total panic when he says to me in the most quaint Irish accent:  "Is your dog a bitch?"

Immediately, my ears perked up, partly because of the accent and partly because if some uses the term "bitch" to discuss your dog, you know they have been around dogs.

Me: "Excuse me?"
Gentleman:  "Is your Border Collie a bitch?"

"Assuming you are asking if she is female, yes.  Yes she is.  Although, if you are truly asking if she's a bitch, she's that too.", I said with a chuckle.

He laughed and asked:  "Does she bite?!"

I laughed again, "There's a strong possibility she might."

Man:  "She reminds me of a dog I had back home in Ireland.  Great dog.  Look how symmetrical her markings are and how smart she is!"

He went on to tell me that he lives here with his wife, but all of his family lives back in Ireland.  They have always had Border Collies and he explained that his family owns a working sheep farm.  Just two weeks ago, he went home for a visit and was able to work with his brother on his brother's farm.  The whole time he was talking to me, Lilly was totally smitten with this man.  She was sitting in his lap, with her tongue lolled out to the side, in total "doggie heaven".

He kicked the soccer ball we had away from us and as Lilly went to chase it, he used a series of whistles and body language to block her movement until she herded that ball right back to us!  The two of them did this several times before we had to leave, and as we were leaving, he thanked me and said he hoped he would see us again.

His parting comments will stay with me for a bit....

"In Ireland, we look for the Border Collie bitch that is strong.  She has to be willing to listen and work with us, yet ignore us and think for herself.  You have yourself one heck of a dog there.  She is a gem!"

I have to think this guy is right on the money.  Although Lilly comes more baggage than an airport, she is quite the gem!

Posted by Emily Cromer at 6:41 PM No comments: 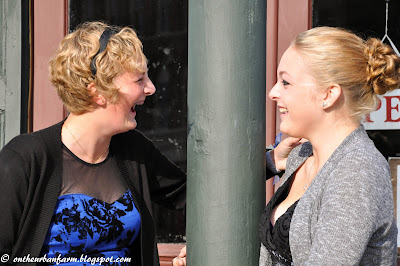 Beautiful child, my hope for you is that you see the same beauty in yourself that I see in you.

Your contagious smile, your laughter, and the purity to always see the good in everyone you meet.

That you never settle for less than you are worth, and that your soul stays as innocent as it is today.

I pray when you get lost in life you remember I love you more than the air I breathe, and I would give you my last dying breath if it meant you would live a moment longer.

I as a parent was supposed to teach you about the world, but honestly, you have taught me so much more.

You have taught me to be kind.  To love with abandon.  To ignite my inner passion.

To do what I love everyday, and to savor each moment.

I am humbled and in awe of you every single day.


Posted by Emily Cromer at 6:35 PM No comments:

No manners?! No problem!

No, we don't make it a habit of allowing our dogs to sit on the dining room table, and right after I took these pictures, the little bum was escorted back onto the floor. But seriously, have you seen a little dog with bigger moxy?!

No manners?!  No problem! 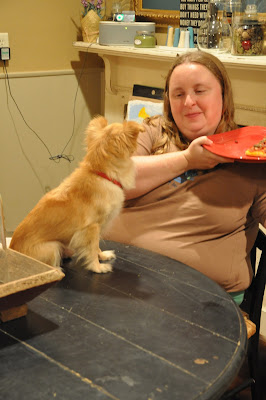 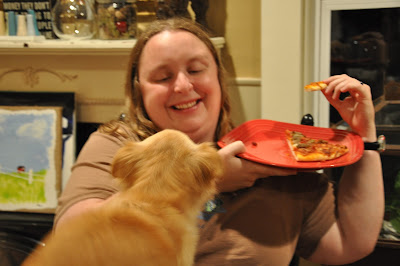 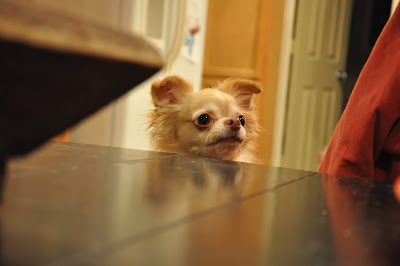 Posted by Emily Cromer at 6:17 PM No comments: