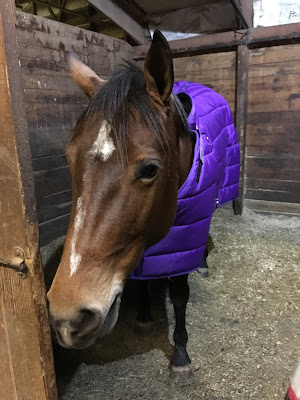 The Polar Vortex is upon is here in the Midwest and to say it's been bitterly cold would be an understatement.  It's so cold outside that it hurts to breathe and if you're outside for even a few minutes your fingers are numb and you can't feel your face.  This morning, as my feet hit the snow, I expected it to be the usual soft snow, but instead it crunched under my feet, too cold to even give to my body weight.

I shouldn't have been worried though.
As soon as I got to the barn, I was greeted by a hungry horse demanding breakfast, and she was warm as toast under her insulated blanket.

There are very few joys in life as blissful as the sounds and smells of  a horse contentedly eating, even when it's below freezing outside....

Email ThisBlogThis!Share to TwitterShare to FacebookShare to Pinterest
Labels: Horses 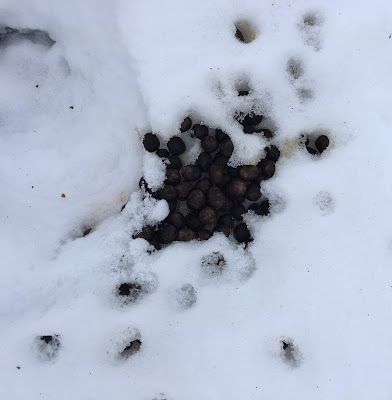 We live right smack in the middle of town, but our lot of land is 3/4 of an acre and it's semi wooded.  Across the street from our house there are more woods, and last year we found the skeletal remains of a fairly large buck, so we figured there were deer in the area.  Kay was so excited when we found that skeleton and really wanted us to have deer on our property.  Sadly, we have seen no signs of deer though ever since.

And then Mother Earth dropped over 14 inches of snow on us in the span of about a week.....

Along with the snow, it has been bitterly cold many days, and truthfully it hasn't been fit outside for man or beast.

The other morning I noticed a bunch of tracks in out front yard.  They zig-zagged back and forth between out yard, the neighbors yard, and disappeared into the woods behind the neighbor's house.  At first I thought they might have been the tracks of a rogue dog, however when Kay and Piper Ann went outside to collect the mail, Piper made this delicious (To her!) discovery.  Our new friends left us: BUTT RAISINS!

It appears our front yard had a visit from several cloven hoofed animals!  The snow must have been too deep for them to find forage, so they came over to our yard to eat a little shrubbery, and take advantage of our always stocked bird feeders.  Can't blame a beast for wanting an easy meal!  We've added chopped apples and carrots under the bird feeders for them and their raccoon counterparts to help them out.

I'm not sure who's more excited in our house.
Kay because her deer friends are back, the deer because he has an easy meal, or Piper Ann because her new friends leave her delicious "butt raisins".

Everyone is happy here on the Urban Farm!

Posted by Emily Cromer at 6:34 PM No comments:

Several years ago, I quit dog rescue.  I couldn't handle the stupidity of people any longer.  I couldn't handle the fact that people suddenly needed to find their dog of 12 year a new home because it's fur didn't match their new couch.  (Yes, that was a thing and it was my final straw...)  I couldn't handle the inhumanity of people, and if I'm being honest, seeing people always behave at their worst made me hate people.  Rescue was tiring because it never ended.  You would place one mended heart and the next broken heart would find you before the ink dried on the first one's adoption contract.  It was a cynical, self gratifying cycle.

In all my years of rescue I prided myself on the the fact I was never a "foster fail".  Now, there were times I did take on a dog who returned to rescue or I adopted because it was a bite case and euthanasia was the only other option, however for 22 years I never adopted a foster dog.  I was and always have been dead set against it.

Just before Christmas, my daughter begged me to foster a dog she had fallen in love with.  This dog was in bad shape.  Definitely one of the worst cases of abuse I had ever seen.  I won't go into the specifics, but Rodger Dog had never known kindness in his life, had never known consistently being fed, and the abuse left him physically and emotionally incomplete.  Rodger Dog was terribly dog aggressive when he arrived here out of  fear, had separation anxiety something terrible, and his eyes eluded to the fact he didn't really care about life anymore.  I told my daughter that Rodger Dog could only stay with us long enough for me to find a rescue who would take him.  I told her, we didn't need another dog.  I told her not to got get attached, because he was not staying.  The truth of the matter is this though:  I couldn't give him up.

This dog is here to stay.  There is something fragile about Rodger that I can't quite put my finger on.  He's learning to be a dog again, learning how his new body works, and supposedly dogs don't generalize, but I can't help but wonder: "What if he feels safe for the first time in his life?  What if he thinks he's "home" only to have his life uprooted again?  What if he leaves us to go to a rescue and wonders where we went?"  I can't let him be lost, confused or feel pain again.  There is something about his broken heart that deserves someone saying enough is enough.
Posted by Emily Cromer at 6:44 PM No comments: 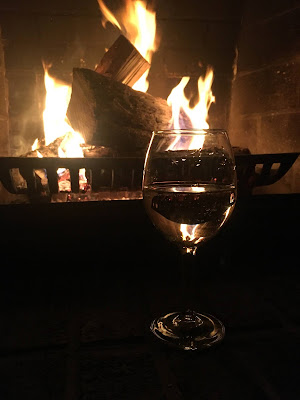 Last week as we said good-bye to 2018, I was as elated as a stay-at-home mom sending her children back to school after a summer full of refereeing arguments.


2018 shook me to my core.
It rattled my being.
It taught me what the word grief meant.
It nearly broke me.

I'm not normally one to wish moments away, but I had to remind myself continually in 2018 that all bleeding stops eventually, though many times I wasn't sure if that was true or how it would happen, and I found myself longing for a less chaotic life.


2018 was a huge reminder of just how fleeting and inestimable life is, and it has been the hardest year of my life thus far. The feelings of despair and sadness I've felt over the last year tops any and all other years of my life combined.

I am praying that 2109 takes notes from 2018 on what not to do!  Regardless, I am marching into 2019 warrior style, determined to live intentionally, and vowing to get my life back on track.  Life is too short not to, 2018 taught me that....