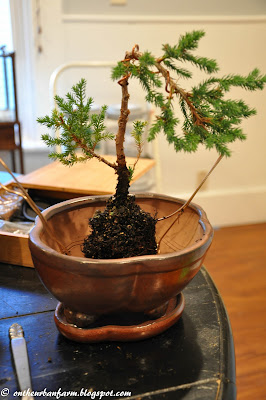 Several months ago, I had a moment of clouded judgement.

I was house sitting for friends of mine who had bonsai trees, and one night as I was sitting on their deck marveling at their little trees, I was instantly hit with the distinct memory of a time in my teen years when I really wanted a bonsai tree because I had seen the movie Karate Kid.

Later that same night I was flipping through the television channels, and what is playing?!  Karate Kid!  Now, call it fate, call it destiny, or call it too much wine, but I just KNEW it was meant to be.  I was meant to own a bonsai tree!

So, I did what any logical person would do:  I got on Amazon.com and I drunkenly ordered 2 bonsai trees.  You know how they always say, "Don't drink and drive?"  Well, my advice to you would be, "Don't drink and Prime", either!

Several days later, in a cardboard box via the Fedex man, arrived my bonsai trees.

After I got them home and unpacked them it dawned on me I had NO clue how to keep these things alive!  The next day, I went to our local nursery, admitted to the bonsai folks there what I had done, got a ton of information and bought another tree.  (You know, just in case I killed the first two trees...)

Before I knew it, I was purchasing special scissors, a watering can from England, etc. and I was the Michelle Duggar of bonsai trees.  (There are now 8 of them with an additional 2 trees I am attempting to grow from cuttings.)

I have kept these little beauties alive for several months now, and I have to admit they are sort of a a big deal to me.  I am attached to them in some weird way.  I equate them with a cross between a plant and a pet.  They require more effort than a goldfish or a regular house plant, but less effort that a dog or cat, and I am pretty much in love with them.  I must also admit they are filling the huge hole in my heart that not gardening in the winter brings, which is welcome this time of year.

I am hoping with enough love, water, and prayer I can keep them alive through the winter....
Posted by Emily Cromer at 3:43 AM