Update on Marty, one of the Maplewood 6-pack  ( http://ontheurbanfarm.blogspot.com/2012/11/the-secret-is-no-more.html ) puppy mill rescues that we took in.  Marty is making big strides in life, sadly not all of the strides are in forward motion.  In the last few weeks, Marty has graduated to pottying outside in the fenced backyard with the other dogs off leash.  He has learned the value of a great couch, and frequently naps with the other dogs there.  He has learned to bark, and he is doing much better on his housebreaking.  Sadly, his fear of humans is getting no better.  Actually I think it was better as of last weekend, but he has regressed some this week.  It is frustrating.  I know it is a stage, and I am sure he will get over it, but non the less it is still frustrating to watch him suddenly be afraid of us again. 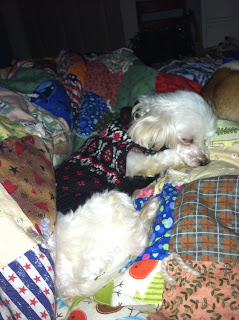 I decided tonight I would try clicker training with Marty to see if I could teach him a few new behaviours, with the hope that some of his old behaviours will eventually disappear.  I had the Reluctant Farmer shoot video of the quick training session, and I was actually impressed that towards the end of the session he wanted to continue the "training game".  I am going to continue working with him this week, and see if I can help him move forward.  My hope is Marty will learn to trust people in the near future.  As you can see by the video, he is a quick learner!