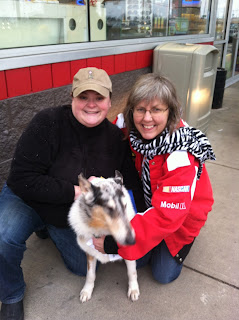 A friend of mine, involved in rescue transport was asked to transport a very old collie to Troy Ohio to it's new home.  She had been conversing with the "new" owner when she realized that the owner wasn't this dog's "new" owner, in fact it was this dog's "old" owner.  The dog that she was transporting was going back to his original owner, Debbie.  My friend was shocked by this and immediately called me when she put two and two together.  I too was shocked for a minute, and then I was actually relieved.  It is seldom in rescue that people that take at an entire situation, and look at it objectively.  I strive to be that rescuer, although sometimes I know I have room for improvement.  I really wanted to meet Debbie!  I felt like I already knew her and I really wanted to answer any questions that she had about her dogs and were they went to.  I know if I was in the same situation, I would want to know what happened to my "babies".

When we took part in the Tipp City hoarding case, it was evident that the owner of those dogs had the best of intentions and that they were loved.  The dogs were all well fed, in basically good condition, and all but one was spayed or neutered.  I felt that the owner's heart was in the right place, but 85 dogs is just too many for one person to physically to take care of.  We were told from the get go that there were a few dogs that the owner wanted back, one of them being a 12-13 year old collie named Secret.  The owner had had Secret since he was a puppy, and no doubt loved him.  She knew Secret had a seizure disorder and was up front about it from the beginning, and collie rescue and I discussed that if the owner was able to get back on her feet again she could have the dog back.  I am happy to say that collie rescue felt that Debbie was in a place that was adequate for her and the dog, and I agree.

Before any readers get up in arms about this, please remember: In rescue we are are all within a few steps of being in the same situation as this owner, and we should pray that other people would help us out.  Meeting Debbie and her sister tonight was nothing short of amazing.  She was everything I knew she would be.  She is very kind, has a big heart, and loves dogs as much as I do.  (And so many of you do!)  She thanked me several times for helping to find her dogs rescues/homes and I hope that Debbie has a sense of closure tonight.  I pray that she feels better knowing that I worked so hard to find appropriate places for those dogs, and that the ones that she was worried about, she no longer has to worry about.  I was able to tell her about every single dog and where it went.  (She was a relieved Momma!)  I pray for Debbie's health and healing, and I am confident that real healing occurs when your heart and mind are happy.  I think Debbie is well on her way tonight.  Her boy is back home with her, in the loving arms and heart of his mom.  As soon as Secret and Debbie laid eyes on each other tonight, I knew there was no where else that he should be.